Reflections on my 18 years in the TSSG 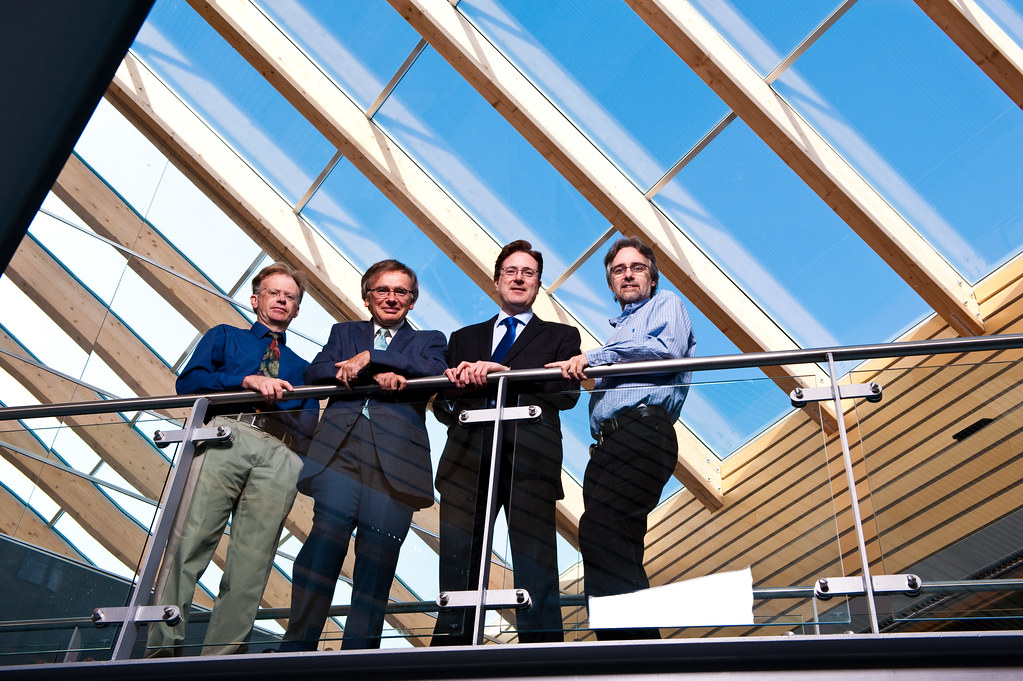 Last week the Irish Independent had a series of articles about the TSSG in Waterford Institute of Technology, spin-out and spin-in companies associated with the TSSG, and other tech startups in Waterford: Waterford’s Specialist Startups Take Over the Mobile World. I was very pleased to see that the hard work many people had been engaged in, in building up this regional capability, was being recognised nationally. Pictured above left to right are Eamonn de Leastar, Willie Donnelly, Barry Downes and Mícheál Ó Foghlú (that’s me) who have collectively led the TSSG for most of its lifetime.

In 1996 Willie Donnelly and Eamonn de Leastar started the TSSG. Willie came to Waterford Institute of Technology (then still called Waterford Regional Technical College, WRTC) at Easter that year, bringing an active European R&D project (FP4 ACTS DIFFERENCE) and a real vision with him. He had one student Micheál Crotty, who is still with the TSSG, on placement with Iona Technologies in Dublin.

Eamonn had been working in WRTC for some time previously, even working on funded R&D projects in the 1980s, and had previous industry experience, particularly in Glockenspiel, the world’s first commercial C++ complier for UNIX and MS-DOS, that really impressed me (I’d been a Zortech C++ fan myself)!

I came to WIT in September 1996, having worked in Computer Services in UCG for the previous 5 years. Upon my arrival Willie offered me the opportunity to join in with the newly established R&D group. I was initially very focused on my new teaching role in WIT, and over the next 3 years helped out by advising on some of the first research MSc theses being completed by the students. In 2000 I came fully on board, initially to manage the NITOURA II project (an EU FP5 project), and to help formalise the research masters activities. I became very involved in a number of the biggest R&D proposals we were writing, initially the HEA PRTLI Cycle 2 (unsuccessful) and then Cycle 3 (successful, M-Zones). This brought in the funding for our first building, ArcLabs, that I helped to name, though it wasn’t completed until a number of years later. After this the focus was on winning Science Foundation Ireland funding, and the TSSG became the first Institute of Technology to lead a consortium to win SFI funding, initially a development award, then a Joint-PI award and finally an SRC (Strategic Research Cluster), FAME.

Barry Downes came on board in 2002 initially to manage the Opium project (the first Chinese engagement in an EU funded project, and it was run by the TSSG) to help us formalise our commercialisation strategy, he became the Executive Director of Innovation and Commercialisation and has since become the CEO. It was great to have someone to drive this activity in parallel to the core research activity I was primarily focused on.

Over this period I was also very active in WIT’s Academic Council (1997-2004), where I helped establish standardised procedures for research degrees in WIT, and helped earn delegated authority for Master (Level 9) and Doctoral (Level 10) level awards in science from HETAC. The success of the TSSG played a large part in the process, because for Levels 9 and 10 metrics associated with active research activity were critical (e.g. funding, publications, and research students).

In September 2004 I became the Executive Director Research of the TSSG, when Willie moved on to take up an executive position in WIT as Head of Research, whilst still leading the TSSG. This meant that Barry Downes and I had operational responsibility for the TSSG, under Willie’s leadership, with Eamonn acting as our technical advisor.

Willie was insistent from the outset that the research group be focused on industry linked problems, and not just conduct research for its own sake. His view was that you needed a balanced portfolio of basic research, applied research, and commercialisation activity.

We documented the TSSG philosophy in our submission to the Irish Innovation Task Force in 2009: Balancing the Basic, Applied and Commercial R&D in Higher Education research in Ireland: Building a Flexible and Sustainable National a Innovation System in an Open Economy. Key to our vision was equality of esteem between the academic side of the activity (peer-reviewed publications, PhD students, and “the science”), with the more pragmatic side of the activity (programming, architecture, and commercialisation). So, we hired the best software developers and architects from industry to help us realise our vision, rather than having these emerge as a side-effect of student activity that was more focused on publication. This is not the normal model for R&D in Ireland, though today has won some respect as an innovative and successful model for promoting innovation from academic R&D.

I would like to name a few more of the great staff who helped build the TSSG. Firstly Kevin Doolin (now COO TSSG) and Miguel ponce de Leon (now leading his own spinout Kodacall), who between them managed the EU projects in the period when I was Executive Director Research, and helped build on the previous successes that had largely been driven directly by Willie. Secondly Dr Brendan Jennings, who joined us as a postdoctoral research fellow and went on to head up the postgraduate programme, taking over the basic research part of my role at a later stage, who cemented our Level 10 programmes, and helped underpin the scope and the delivery of the critical FAME project. Thirdly Dr Sasi Balasubramaniam, who joined as a post-doctoral researcher and took the networking research in such innovative new directions (e.g. nano-communications) that he inspired us all. Fourthly Dr Sven van der Meer, who was our first post-doctroral researcher and now works as a Master Engineer in Ericsson, NM Labs, Athlone, Ireland. Finally, initially John Ronan and then Jerry Horgan led the infrastructure team that allowed us to eventually build a world class data centre on site, and always be at the cutting edge of networking and hosting technologies in Europe, and maintained an excellent relationship with HEAnet. These were the people who had the biggest impact personally on the basic and applied research, but of course there were many others too numerous to mention individually.

Over the years 18 years 1996-2014 the TSSG has achieved a long list of impressive milestones, this is my personal selection of these highlights:

But the over-arching achievement has been the creation of a critical mass of internal (R&D and commercialisation with longer term basic focus, more immediate industry-linked applied focus, and commercialisation and industry links) and external (an ecosystem of companies in the region directly or indirectly linked to the R&D hub) activities.

I used the TSSG model as an inspiration for my own doctoral research in Irish research funding policy, in the University Sheffield, and I published my doctoral thesis in 2010 Science, Engineering and Technology Research Funding Policy in Ireland 1995-2008: A Policy Document Analysis.

If I were to summarise the lessons I’ve learned about R&D and innovation it would be that you cannot have a staged formal process from idea to commercialisation. Instead you need to nurture a more complex ecosystem where you cannot predict the trajectory of an individual idea from inception through to building a successful business model to exploit the outcome. It is as much about the synchronisity of a casual meeting in the coffee shop or canteen as it is about a formally managed pipeline of opportunities. This is best encapsulated in the “Systems of Innovation” model of innovation. I strongly beleive Ireland should do more to manage all parts of this diverse innovation ecosystem, and not focus all our energies on the pure academic R&D process, though that is needed too.

In Q4 2010 I decided to take a leave of absence from the TSSG, and spinout with one of the most promising startup companies we had co-founded, FeedHenry. This was one of a number of successful commercial ventures that Barry Downes had founded and built up over the previous 4-5 years to try and deliver on the promise of commercialising the TSSG’s huge range of R&D activity. I managed the transfer of my energies over the following years to allow for transition of my research students, and of the projects I was directly involved in. I’ll talk more about FeedHenry in another post.

I have remained on the Board of the TSSG and I continue to be very interested in its development and in insuring its further success.